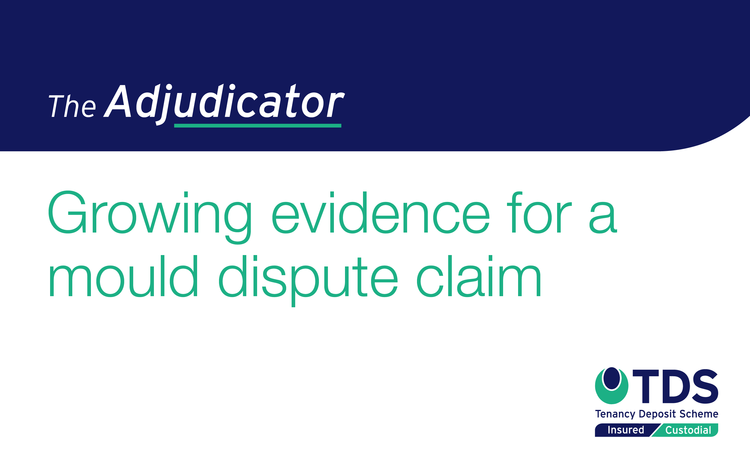 A recent poll by Tenancy Deposit Scheme (TDS) found that two-thirds of landlords have experienced mould in their property. However, responsibility isn’t always cut and dry, and the majority of landlords agree that mould and condensation could be either the landlord’s or tenant’s responsibility depending on the situation.

Where does that leave you in the case of a tenancy deposit dispute regarding mould? Much of a claim’s outcome will depend on evidence, as this previous TDS adjudication case study shows.

In this particular case, the letting agent initiated a dispute claim for £700 on behalf of the landlord.

The landlord wanted to keep the deposit because the decoration in the flat had been damaged by mould that had occurred during the tenancy. The evidence presented to the adjudicator included the check-in and check-out reports which confirmed that deterioration did occur and a specialist contractors report which set out the cause of the mould as a tenant lifestyle issue.

The tenants acknowledged that the mould marks were present and agreed to pay for cleaning costs, but they felt it was unfair to pay for the re-decoration too.

It was clear to the adjudicator given the extent of mould found at the end of the tenancy that cleaning of the affected areas would have been ineffective in removing the mould without resulting damage to the décor and it was therefore reasonable to award redecoration costs to the landlord. However, the amount to award needed to be carefully considered.

The landlord had not produced evidence to show a breakdown of costs for cleaning, treatment of the mould or redecoration. Invoices and quotes would have been useful here. The landlord advised the agents that these were being obtained, but they were not submitted to the adjudicator.

The adjudicator also had no evidence to show the age of the property’s most recent decoration or any confirmation that the flat was newly decorated at the start of the tenancy. Additionally, the check-in report included a description of scuffs and marks to several areas of the property prior to check in.

In determining how much to award the landlord, the adjudicator assessed the decorative condition of the property at check-in, the length of the tenancy and the expected lifespan of the decor, taking into consideration wear and tear and betterment.

Taking these factors into account, the adjudicator awarded the landlord £300 towards the cost of cleaning and redecoration.

This case could have resulted in quite a different outcome if further evidence had been provided to support the claim.

These case studies are designed to help landlords, letting agents and tenants to better understand how adjudicators make their decisions – and how to avoid common disputes from happening. If you would like to learn more, book your place on the next Adjudication workshop at the online TDS Academy.

TDS Custodial: where TDS hold the deposit for the duration of the tenancy. Landlords, you can protect your deposits for FREE today.