Home»Blog»#AskTDS»#AskTDS: “Why do I need to tell TDS about...

#AskTDS: “Why do I need to tell TDS about any pre-agreed amounts that are not in dispute?” 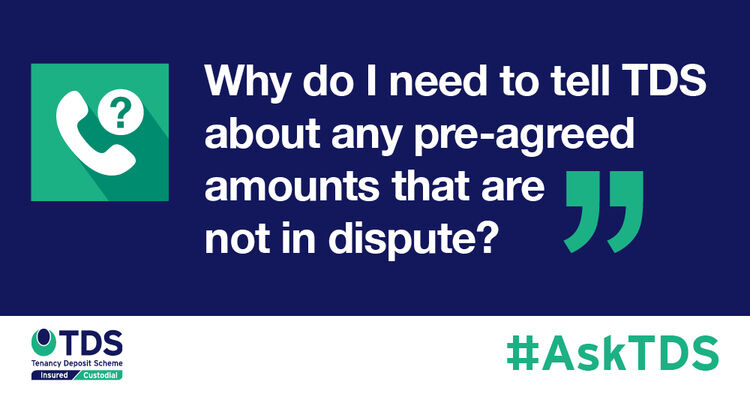 This article has been written in response to a tenant’s query: “Why do I need to tell TDS about any pre-agreed amounts that are not in dispute, in relation to the tenancy deposit?”

In our previous tenant #AskTDS, we discussed the importance of both parties making attempts to come to an agreement over any deductions from a tenancy deposit before raising a dispute with TDS. However, if an agreement cannot be reached, either party can raise a dispute and utilise TDS’ impartial dispute resolution service.

One problem often faced by TDS adjudicators, upon receipt of a dispute, is the failure to mention any amounts that have already been agreed between the parties and therefore not in dispute.  An example of this would be, if a landlord was claiming £200 for cleaning of carpets and £400 for the repair of a shed from a £700 deposit, the cost of the claims totals £600 and therefore £100 of the deposit is not disputed and should be returned to the tenant within 10 days.  In relation to the remaining funds, if the tenant agrees that the carpets do require cleaning and that £200 is a fair amount for this item, this amount is also not in dispute and can be removed from any claims. The only amount, therefore, still unresolved is the £400 claim for the repair of the shed. If the tenant disputes the damage to the shed and does not agree to any deductions, this could become the amount in dispute if the parties cannot reach an agreement.  In this instance, where no agreement can be made, the disputed amount of £400 should be the claim submitted.

Another issue that TDS Adjudicators face is receiving disputes with an outline of costs where there is an amount that is described as being undisputed as the landlord/agent has already agreed the deduction with the tenant, but without an explanation as to what this amount was for.  An example of how this could cause an issue would be the parties agreeing that £200 could be deducted from the deposit to cover cleaning costs to the carpet but only relating to TDS that £200 was undisputed.  This could lead to the adjudicator making another award to the landlord for the cleaning of the carpet as they were not made aware that this had already been satisfied.

TDS have developed a ‘Deductions Template’ that helps landlords/agents present the dispute and the evidence in a clear and comprehensive way that will allow the TDS adjudicator to make a fair decision on how the deposit should be allocated.

How much money can be disputed through TDS?

We can only ever award money up to the value of the deposit registered with us, so you will not be required to pay extra money to your landlord or agent should the adjudication not be awarded in your favour. However, your landlord or agent could choose to take the matter to court over any amounts that exceed the value of deposit. There is also no minimum dispute amount required, however for very small amounts the parties should consider whether the amount is enough to justify using the full dispute resolution process.

The Tenancy Deposit Scheme (TDS) is a government approved scheme for the protection of tenancy deposits; TDS offers both insured and custodial protection and also provide fair adjudication for disputes that arise over the tenancy deposits that we protect.

TDS can only comment on the process for this scheme, other deposit protection schemes may have a different process/require different steps. Content is correct at the time of writing.