#AskTDS: “My landlord raised a dispute, can I counterclaim?” 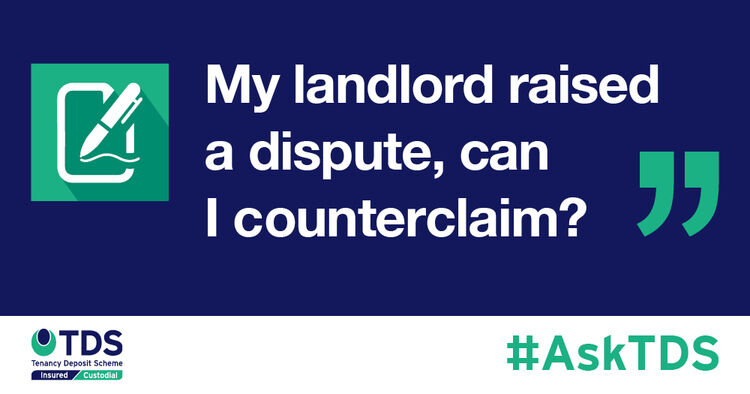 This article has been written in response to a tenant’s query: “My landlord raised a dispute, can I counterclaim?”

At the end of a tenancy, before a dispute is raised, both parties should try to agree on any deductions before considering raising a dispute.  If your landlord or agent wishes to make a claim from the deposit, they should contact you with any proposed deductions, allowing both parties the opportunity to discuss and reach an agreement in how the deposit funds should be distributed.

In TDS Insured, if an agreement cannot be reached, any party to the tenancy can raise a dispute after ten days. This ten day period is considered reasonable time for the parties to reach an agreement.

TDS Custodial operates in a slightly different way.  As the deposit funds are held by TDS, either the member or the tenant can raise a repayment request indicating how the deposit should be repaid.  If the parties are unable to agree as to the distribution of the deposit, they have the option to use the TDS adjudication services. In this instance, before progressing to dispute resolution, the parties are asked to provide evidence to show that they have tried to reach an independent resolution.

Our data shows that the majority of disputes in our Insured scheme are raised by tenants or agents with landlords only accounting for approximately 11% of disputes. However on some occasions, the landlord or agent may raise the dispute but the tenant, due to issues that were encountered during their tenancy, may also wish to make a claim against their landlord or agent. This counterclaim cannot be considered as TDS can only adjudicate on claims related to the protected deposit and therefore are unable to consider ‘set-offs’ or additional claims brought by the tenant.

TDS act as an impartial party in relation to the deposit, it is important therefore, that they are presented only with the facts and evidence relating to deductions from the deposit itself.  The natural path of the deposit is for it to be returned to the tenant unless the landlord or agent can provide suitable evidence to support proposed deductions.

We sometimes see cases where a tenant has stopped paying rent as they feel they should be awarded compensation for other matters concerning their tenancy such as a broken boiler.  If you stop paying your rent, your landlord can raise a dispute for rent arrears and claim this from your tenancy deposit. Within their evidence submission a tenant would not be able to rely on the broken boiler as grounds for not paying rent as this is a ‘set-off’ and an example of a tenant claim we would be unable to deal with.  This particular example does not affect your ability to use the court system for any independent claims.  TDS offers an alternative dispute resolution service, as an alternative to court. Either party can take their claim through the court process rather than via the TDS adjudication service should they chose to do so.