The Adjudicator: Rent Arrears and a Missing Heater 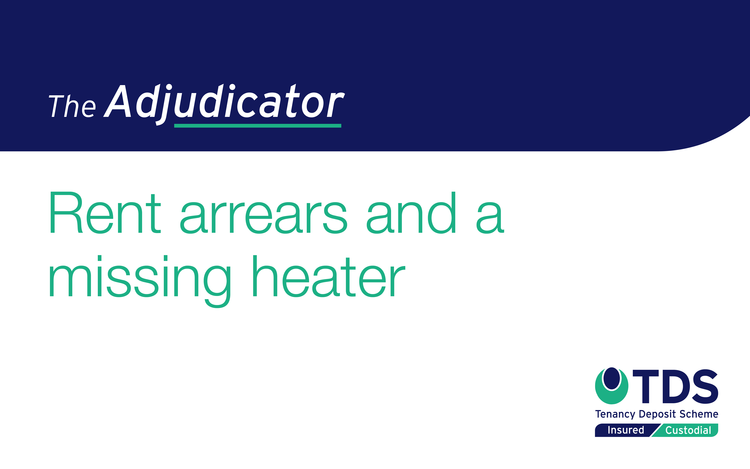 Sandy Bastin, Head of Adjudication Services at Tenancy Deposit Scheme (TDS), the only not-for-profit tenancy deposit protection scheme, discusses the outcome of a recent claim against a deposit.

The landlords claimed for:

The tenant disputed the rent claim saying that the landlord had agreed that the tenant need not pay rent for the -four day period claimed.  The tenant made no comment on the matter of the unpaid loan amount or the missing heater.

In relation to the claimed rent, the evidence showed that the parties agreed that the tenancy ended at the end of the month; however, it was clear that the landlord had agreed to the tenant remaining in occupation for a further period of 4 days.

While the tenant’s argument was noted, the tenant did not provide written evidence to support her statement that the landlord had agreed that the additional days of occupation would be rent free.  Without conclusive written evidence that the landlord had agreed to waive the rent for the additional period, the adjudicator based the decision to award for rent on the contractual obligation of the tenant to pay rent, under the terms of the tenancy agreement during occupation.

The adjudicator was unable to consider an award for the missing heater, as there was no record of a heater being present or recorded in the check-in report for the start of the tenancy.  Without evidence, such as email correspondence to show that a heater was added to the property during the tenancy, or an amended check-in report, it was not possible for the adjudicator to consider the claim for its replacement.

As for the claim for repayment of a small loan made by the landlord to the tenant, it was not possible for the adjudicator to make an award from the tenant’s deposit, as any arrangement made between the parties, evidenced or not, would have been an arrangement that fell outside the terms of the tenancy agreement, which did not allow the deposit to be used for such a claim.

The full deposit was submitted to TDS, despite a portion of it being clearly identified as ‘undisputed’.  Any undisputed deposit amount should be returned to the tenant, within 10 days of a request having been made.

What are the key points here?