The Adjudicator: Fair Wear and Tear in Deposit Disputes 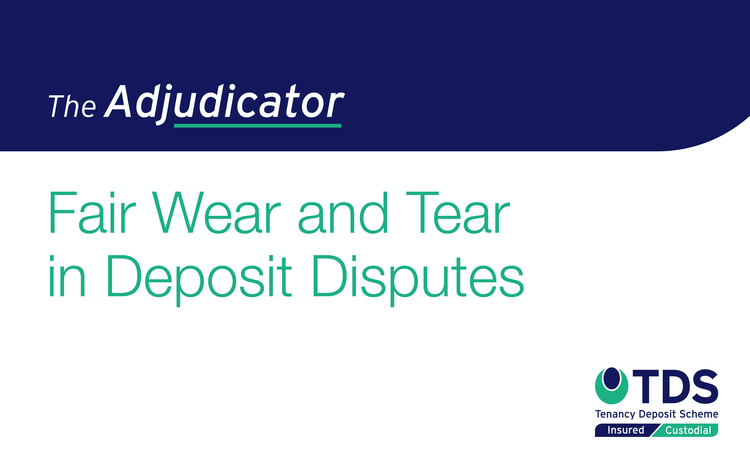 Sandy Bastin, Head of Adjudication Services at Tenancy Deposit Scheme (TDS), the only not-for-profit tenancy deposit protection scheme, discusses the outcome of a recent claim against a deposit.

The landlord’s claim at the end of the tenancy was for:

The tenants disputed the claims, saying that they had no knowledge of any chip to the paintwork of the bottom step of the stairs and in any event, the chip was not identified in the check-out report. Any additional defects amounted to fair wear and tear andthey were also not aware of any dent to the door of the fridge.

The tenants provided evidence that builders entered the property within hours of them vacating to carry out works.  The tenants acknowledged that a stencil had been added to the wardrobe door during the tenancy.

The original inventory provided was dated in May 2017 and indicated that the white painted stairs had aged marks, cracks, chips, and indentations.  The check-in report dated in April 2018 from the start of the tenancy, identified further chips to stair treads. The check-out report did not record any chips to the stairs or dents to the fridge, nor could chips and dents be seen in the embedded photographs.  The report noted the addition of a stencil to the wardrobe door.

Although the landlord’s photographs appeared to identify the matters claimed, importantly they were undated, and as such were not reliable evidence as to the condition of the stair tread or fridge at the end of the tenancy.

Furthermore, as the tenants had shown with email evidence that arrangements were made for contractors to enter the property to carry out works immediately after they vacated, some on site as they left, the adjudicator could not rule out the possibility that the dents to the fridge and chip to the bottom stair occurred after the tenancy ended.

Instead, the adjudicator relied on the check-out report which did not identify the damage claimed and took into account the pre-tenancy condition of the paintwork, which revealed heavy painted over defects, which would make chipping more likely to occur, and the attendance at the property of contractors.

The length of the four-year tenancy was also considered, and it was found that an additional chip would in any event in the circumstances constitute fair wear and tear for which the tenants were not responsible.  No award was made.

An award was made for the removal of a stencil from the wardrobe door, however fair wear and tear over a four-year tenancy, and betterment were considered.  A contribution of the amount claimed was made, as to have awarded the full amount to strip, undercoat and freshly paint the entire wardrobe, when it was not freshly painted at the start of the tenancy, would have amounted to betterment.

Book a place on our TDS Academy – Foundation Course and Adjudication Workshops.

We also run on-demand courses with our partner, Inventory Hive, so book now and view at your leisure.

Joining TDS is simple! It only takes a few minutes to join today.  If you’d like to transfer from another scheme, we’ve made this easy. Visit our switch page and we’ll handle the rest.

About the author: Sandy Bastin

Sandy joined TDS in 2008 and is now Head of TDS Adjudication Services. A qualified solicitor with many years’ experience practising and specialising in Real Estate, Sandy is responsible for the management of the adjudication team, recruiting and training TDS Adjudicators. She provides continued support and mentoring to the team, which includes quality assurance activity to ensure the high standards expected from TDS Adjudication decisions are met. Sandy is also a complaints handler for TDS England and Wales and is involved with the final decisions following reviews for SafeDeposits Scotland and TDS Northern Ireland. Sandy delivers TDS Adjudication Workshops and provides Adjudication training – the TDS Way. She also plays a role in ensuring TDS provides an excellent Customer Service experience.