Renting Homes Wales Act 2016 is changing: What you need to know? 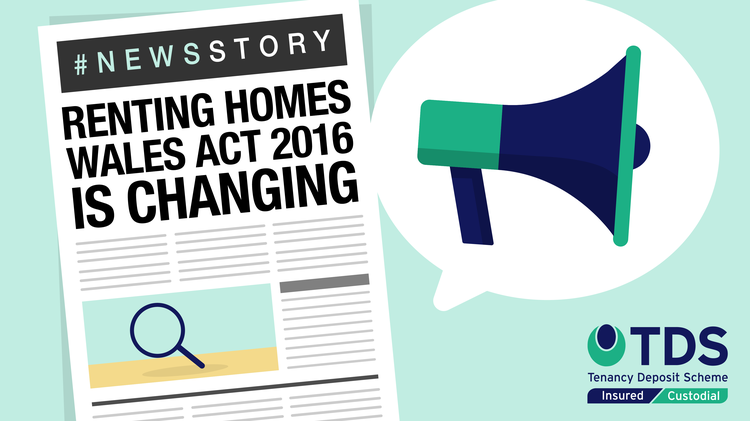 From Thursday 1 December, many of the laws around renting in Wales are going to change.

This update in legislation marks a further separation between PRS laws in England and Wales. Landlords with properties in Wales need to ensure they know about all changes, updating their properties and documents accordingly.

You can read more about the updates in-depth here.

For deposit protection, all existing deposits protected with TDS will be unaffected by the legislation changes. However, there will be changes that agents, landlords and tenants need to be aware of.

All existing tenancies and licences will on 1 December 2022automatically convert to occupation contracts as standard, with the tenant becoming known as the ‘contract holder’.

Key points to note include:

In a tenancy with multiple occupiers, there are changes within the new system; contract-holders can be added or removed from a joint contract, without the need to end the contract for all; the consent of the landlord is required.

With the new legislation, landlords and agents are unable to serve a ’no-fault’ notice to end the contract, unless the contract has become periodic, and the notice must be for at least 6 months.  Details of the new notices with new rules, can be found here.

An Inventory is now compulsory

There is a supplementary provision within the legislation that will require an inventory to be provided in all circumstances. The provision advises “the inventory must set out the dwelling’s contents”.  If the property is unfurnished, the inventory should reflect his and is likely to refer only to fixtures.  Inventories are there to protect the interests of both parties and are essential evidence in any deposit disputes.

Here’s what agents and landlords need to do…

Occupation contracts can start verbally, but you must issue a written statement of the contract to all contract-holders (this replaces the current tenancy or licence agreement).

Be aware of new notice periods for possession

No-fault notice (periodic standard contracts only) – six months minimum for new occupation contracts and can’t be served in first six months of occupation. Breaches: No notice period for anti-social behaviour (you can apply to the court straight after giving the notice); 14 days for serious rent arrears (arrears of 8 weeks / 2 months); one month’s notice for most other breaches.

Including electrical safety testing and ensuring working smoke alarms and carbon monoxide detectors are provided, on each storey of the property.  A landlord will not be able to issue a ‘Landlord’s Notice’ or break clause if they are in breach of the fitness requirements

without needing a court order, after serving a four-week warning notice

Contract-holders can be added or removed

without having to end the current contract and start another one.  Consent of the landlord is however required.

twice to other people that live with them (including a spouse, adult, children or a carer) if they die.

Here’s what tenants need to know

New, simpler contracts will be issued

Tenants and licensees are called “contract holders” under the new legislation and will be issued with an ‘occupation contract[SB1] [MH2] ’ to replace any existing tenancy or licence agreement.

Your home must be fit to live in

The new legislation helps to ensure that landlords maintain dwellings to prevent them from becoming unfit for human habitation.  A contract-holder may not be liable to pay rent for any period which the property is deemed to be unfit.

More notice of a rent increase

The notice period for a rent variation will double from one month to two months’ notice, which may be issued annually.

Stronger rights to stay in your home

New contracts issued after 1 December will be subject to a minimum of six months’ notice if you’re not at fault and the landlord wishes to repossess the property (often called a ‘no-fault eviction’). Also, your landlord cannot give you this six-month notice until you’ve lived in the property for six months. This means you can expect to live in your property for at least 12 months.

Your landlord cannot ask you to leave just because you’ve complained that your home is in a poor state of repair (for example, your boiler is broken). This is sometimes referred to as a ‘retaliatory eviction’

Contract-holders can be added or removed

from the contract more easily. This means, if another joint contract-holder leaves the contract, you won’t be at risk of homelessness.

Tenants Notice to end the contract

Greater rights to pass your home if you die

Succession rights include your partner or adult children, if they live with you.

Advice for tenants, landlords and agents

With no transition period, TDS recommends that landlords, agents, property managers and tenants familiarise themselves with the new terms and detail of the new legislation. The Welsh Government has published guidance which can be found here.