Home»Blog»#NewsStory»#PressRelease: £800k of Grants Awarded to the ... 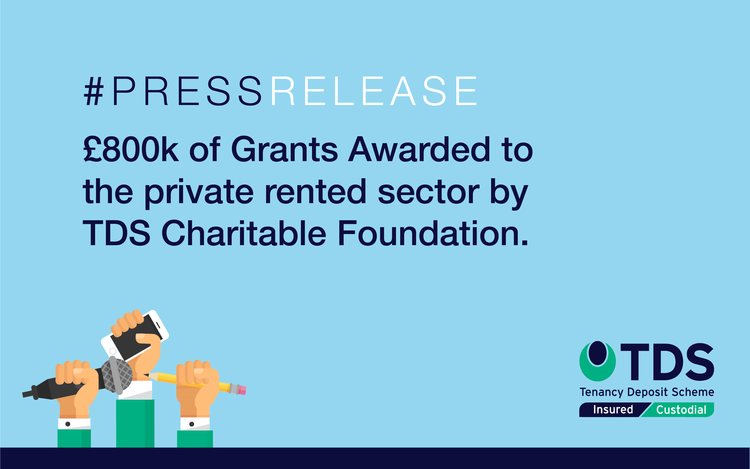 The TDS Charitable Foundation has published its 2020-2021 Annual Review which shows that the private rented sector (PRS) has received over £800k in grants from the charity since it was launched.

The Foundation exists to raise the standards in the PRS, by providing education and information to tenants, landlords and agents directly and through grants to other organisations.

Funded mainly by donations from the Dispute Service, the TDS Foundation primarily provides grant funding to organisations with projects that focus on landlords’ obligations and tenants’ responsibilities.

To date, the Foundation has awarded funding to 59 projects within England, Wales, and Northern Ireland totalling £808,100. The full ‘Digest of Projects 2014-2020’ from the past six years will be updated to include those projects funded over the past year.

During the most recent round of funding, the TDS Charitable Foundation invited organisations to submit funding proposals for a range of projects, which were then considered by the Trustees. Three organisations were successful with their applications and received grant funding totalling £44,928.29.

“The Covid-19 pandemic has had a significant impact on many industries, including the PRS and the Foundation has been keen to continue to assist projects which have supported the needs of tenants and landlords in the pandemic and beyond,” commented Steve Harriott, TDS Charitable Foundation Trustee and Chief Executive of the Dispute Service.

The £9,943.29 funding awarded to the Exeter Private Rental Forum will be used to help landlords deliver better tenancy management.

The Centre for Sustainable Energy received £9,985 in funds which will build on their earlier project, ‘Get Ready for MEES’ in response to the high demand seen for landlord support during a very challenging time.

The Manchester Citizen’s Advice Bureau was awarded £25,000 which will be used to build on the success of the award-winning ‘Advicebot’ to provide a more scalable, personal and responsive advice service.

Continuing the theme of helping the PRS after a difficult year, TDS has also published its latest edition of Letterbox magazine, which includes articles about the many free tools, apps and resources available to landlords and letting agents. The magazine reveals the latest insights on mould in rented properties and includes an excellent checklist on the must-know essentials of deposit protection. The ‘Helping Hand’ issue is now available to download here! DOWNLOAD LETTERBOX

Not using TDS yet? It takes just a few minutes to join. JOIN TODAY or see why others are switching to TDS Custodial and TDS Insured: WHY SWITCH?

About the TDS Charitable Foundation

The TDS Charitable Foundation was launched in 2014 and is funded mainly by donations from the Dispute Service. It provides grant funding to organisations within England, Wales and Northern Ireland.

In Scotland, the Dispute Service is a guarantor in the SafeDeposits Scotland Trust which works towards similar goals in the Scottish private rented sector.

The Foundation endeavours to advance education about housing rights and obligations in general, and in particular about:

Organisations are invited to submit bid funding applications to outline the proposed projects or initiatives they seek funding for.