Home»Blog»#ExpertView»#ExpertView: What would a new housing court do ...

#ExpertView: What would a new housing court do for me? 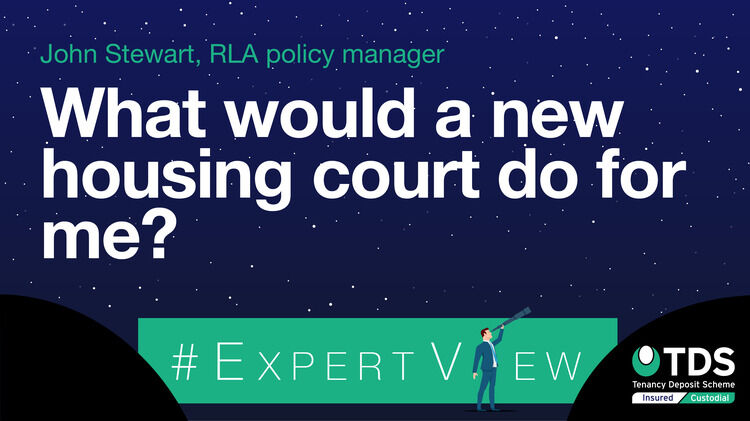 RLA Policy Manager, John Stewart, looks at how the introduction of a housing court could transform the way the PRS operates.

Tenancy Deposit Scheme (TDS) partner organisation, Residential Landlords Association (RLA), first promoted its proposals for a new housing court ahead of the 2017 General Election, with the Government launching a consultation into the plans last month.

The court system as we know it is broken. Slow, complex, underfunded.

A landlord seeking possession against a tenant who does not pay their rent has to wait an average of 22 weeks between issue and finally obtaining possession, with tenants facing an equally slow and complex process, dependent on local authority enforcement to tackle disrepair issues.

The current situation is neither sustainable or acceptable and is what led the RLA to campaign for reform, demanding a specialist housing court and tribunal service in our 2017 election manifesto.

In October 2017, Sajid Javid, in his former role as Communities Secretary, confirmed that the Government planned to look at the plans and it was a development we continued to press for in a meeting with Housing Minister Heather Wheeler MP earlier this year.

Calls for a housing court also formed part of our recent submission ahead of the Autumn Budget.

Following months of campaigning, the Government launched the new consultation on a proposal to introduce a Housing Court as a single path of redress for both landlords and tenants.

What do we want?

What the RLA wants is a new, properly funded, housing specialist court and tribunal modelled on the existing Residential Property Tribunal.

The RLA wants the new court, like the current Tribunal, to have its own experts, removing the need for parties to hire external specialists and, where necessary, carry out property inspections, minimising the need for witness statements and arguments over the state of a property.

This court could deal with cases on paper where appropriate and also direct parties to mediation where possible to avoid the court system altogether.

Most importantly, it would be able to use its specialist knowledge of property and of the law to decide matters without the need for expensive lawyers and long arguments.

This would reduce costs for landlords and tenants, provide better access to justice, and reduce the cost of the process for both parties and for the Government.

What is the Government doing?

The Government, in its consultation document, quotes extensively from work by RLA research arm PEARL, which found rent arrears are the primary cause of landlords taking possession of their homes.

It is specifically asking for evidence on:

We welcome the Government’s decision to investigate the plans – and we are optimistic.

Change is needed, and not only could the introduction of a new court help speed up the current court process – improving access to justice for landlords and tenants – it could also tick another box for the Government in rooting out criminal landlords and giving greater confidence to landlords to offer longer family-friendly tenancies.

And this can only be a good thing.

John is the Policy Manager for the RLA. He has over 20 years’ experience working in politics, as a successful election agent, MP’s assistant, local councillor and council leader, and is a former charity chief executive.

He oversees RLA policy work across all levels of Government – central, devolved and local – working to ensure that landlords’ views are represented, and officials, MPs, Assembly Members and local councillors have key information and evidence about the PRS before they take decisions.

Tenancy Deposit Scheme (TDS) is a Government-approved scheme for the protection of tenancy deposits; TDS offers both Insured and Custodial protection and also provides fair adjudication for disputes that arise over the tenancy deposits that we protect.

RLA: If you are a landlord and would like to keep up to date with any changes that may affect you or your responsibilities, you can contact the RLA at: info@rla.org.uk and quote reference: dg715 to receive 25% off your first year’s membership.