Home»Blog»#ExpertView»#ExpertView: Universities to speak out over axi...

#ExpertView: Universities to speak out over axing of fixed term 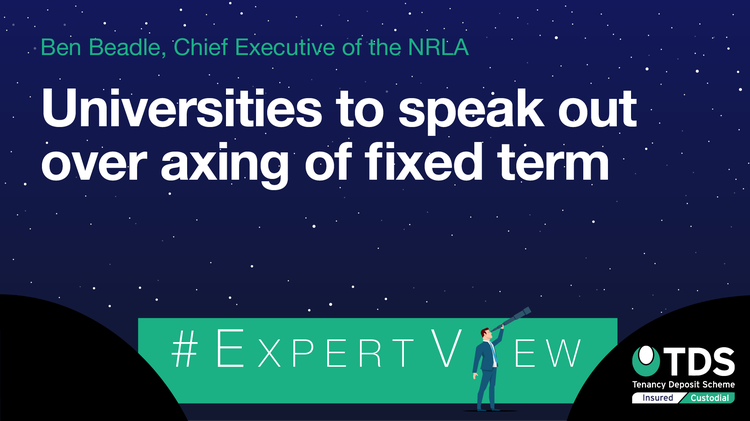 Universities will add their voices to NRLA calls for a u-turn on plans to abolish fixed term contracts for student landlords. NRLA Chief Executive, and student landlord, Ben Beadle explains the devastating impact this could have on students looking to the PRS for a home.

When the Government published its rental reform white paper earlier this summer, there were few surprises.

Plans to abolish Section 21 repossessions had already been announced, as had proposals to extend the Decent Homes Standard, so it was a new plan to abolish fixed term contracts that raised eyebrows when the paper was published.

While the change will impact all landlords, it sent shockwaves through the student landlord community, with the sector reliant on fixed term contracts in order to function effectively.

Without the fixed term – generally lasting an academic year – landlords will not be able to guarantee accommodation for the students hoping to move in the following year, as there will be no guarantee they will get their property back.

What is even more galling, is that government has created an exemption for purpose-built student accommodation (PBSA) allowing bosses to keep the fixed term.

The consequences of these plans are far reaching. If the government moves forward with proposals as they stand, student landlords in the PRS will only be able to offer periodic tenancies.

Tenants will have the right to remain indefinitely, but will themselves be allowed to give notice after two months. The only circumstances in which landlords will be able to take back their properties is via one of 17 new grounds, which include no provisions for students finishing their year of study.

With no guarantees students will move out at the end of the academic year, it will be impossible for landlords to market their properties for the next year, or agree tenancies, which will all leave students looking for somewhere to live high and dry.

It is inevitable that such a move will force some student landlords to rethink their portfolios and move out of the sector altogether. This in turn will reduce the accommodation options open to students, with a reduction in supply pushing up rents.

The poorest will be hit hardest, unable to afford homes in the purpose-built blocks, which can be £120 more per month to rent, as PRS landlords exit the PRS student market.

Figures released last week showed that by 2025 the UK is already facing a shortfall of around 450,000 student beds, due to a combination of an increasing number of students going to university and a relatively low supply of new student homes, a situation that will only be made worse by the changes.

What is the NRLA doing about it?

The NRLA has written to universities, student unions and other stakeholders across the country to explain the consequences of these plans on students and their accommodation options.

A number of high-profile institutions have written back expressing their concerns, with meetings planned in the coming weeks to talk about how they can add their voices to our calls for change.

We at the NRLA want to see the exemption afforded to purpose-built student accommodation blocks extended to student landlords within the PRS, allowing them to offer year-long tenancies.

We would also like to see a provision allowing landlords to repossess with two months’ notice in month 10 of a 12-month contract, where the property is needed for incoming students.

These are very simple changes, however, they would help ensure a level playing field for accommodation providers, protect landlords’ businesses at a time of soaring demand and improve student choice when it comes to finding an affordable place to live.

We look forward to constructive discussions with universities and students’ unions across the country to put forward a united front in our representations to Government ahead of the Renters’ Reform Bill.If you would like to add your voice to our calls why not contact your MP to explain the impact the changes will have on you and your business. You can access our landlord toolkit, including template letters and information on how to contact your MP via social media here.

The NRLA and Tenancy Deposit Scheme (TDS) are committed to supporting landlords and their tenants in the private rented sector. We offer a wealth of free deposit protection resources, documents and guides on all aspects of lettings, which you can rely on to ensure you are compliant with all current legislation.

If you aren’t a customer of TDS yet, it’s quick to join!