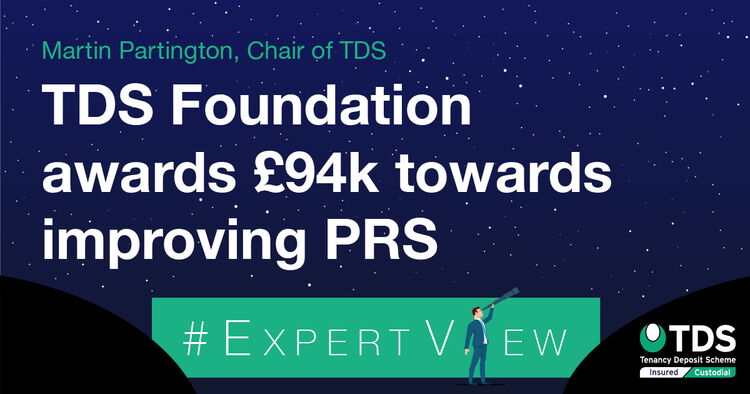 The TDS Charitable Foundation awarded over £94,000 to organisations to advance education on housing rights and obligations in the PRS.

Now in its ninth round of funding in four years, the Foundation’s awards were split among ten organisations and charities across England.

The Foundation was established by Tenancy Deposit Scheme (TDS) to raise standards through education in the private rented sector.

Projects being awarded funding include:

To date, it has provided over £400k in funding support for organisations across England and Wales and hopes to top the half million-pound mark in its next round of funding.

Prof. Martin Partington CBE QC, Chairman of The TDS Charitable Foundation, said: “We’re proud to support the ten initiatives receiving awards. The PRS is often difficult to navigate but the projects we’re supporting will go somewhere to make sure that both landlords and tenants across the country know their rights and responsibilities.

“The TDS Charitable Foundation goes right to the heart of the private rented market, with grants aimed directly at benefitting tenants and landlords in communities across England and Wales.

“Applications from similar organisations for our next round of funding will be close on 4 October 2017 and we’d encourage any organisation or charity that educates and informs tenants, landlords or agents to apply.”

Organisations wishing to apply for support must submit their bids by 5pm on Wednesday 4th October 2017.

Further information on the application process and criteria are available here: https://bit.ly/TDS_Char