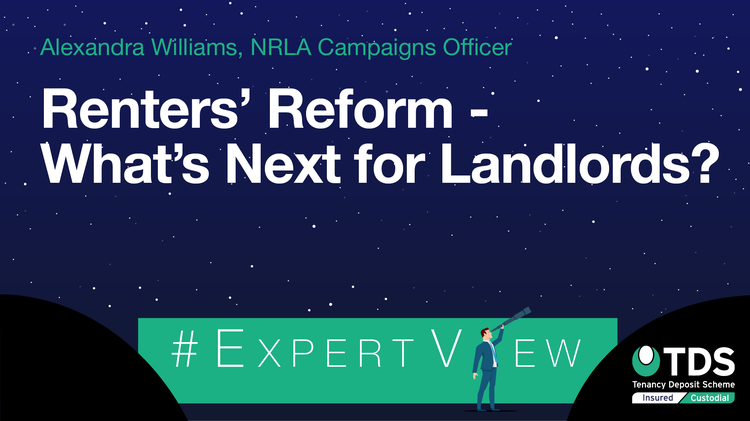 In this week’s #ExpertView, Alexandra Williams, Campaign Officer at the National Residential Landlords Association (NRLA), looks at what’s next for landlords and the Renters’ Reform Bill.

The Government has committed to reforming the private rented sector, including abolishing Section 21 repossessions – so-called ‘no fault’ evictions, and reforming grounds for possession.

Plans to publish the Government’s response to its 2019 consultation on the removal of Section 21 were announced in last month’s Queen’s Speech.

So, can we expect a Renters’ Reform Bill this year? And what does the NRLA want to see included in the Bill?

The Queen’s Speech in May reconfirmed the Government’s commitment to bringing forward reforms in the private rented sector.

During the speech, the Government announced that there will be a white paper outlining proposals for reform of the private rented sector published later this year. It also committed to publishing its response to its 2019 consultation on the removal of Section 21, outlining the proposals for a new ‘lifetime’ tenancy deposit model.

When is the Renters’ Reform Bill likely to be introduced?

It has been almost two years since plans to introduce a Renters’ Reform Bill were first announced in the 2019 Queen’s Speech. There was still no mention during this year’s speech of a specific date for when the Bill will be brought forward. However, given that the White Paper is expected this Autumn. and there will be extensive stakeholder engagement to inform and shape these major reforms, it’s unlikely we’ll see the actual Renters’ Reform Bill before 2022.

At the end of June, NRLA Chief Executive Ben Beadle represented NRLA members when he took part in high level Government talks on reform of the PRS. The first roundtable meeting on this matter was chaired by Eddie Hughes MP, Minister for Housing and rough sleeping, and the NRLA was one of several stakeholders invited to the meeting.

What can we expect in the white paper?

White papers are policy documents produced by the Government that set out their proposals for future legislation. After this stage, the legislation will be brought forward to reform the private rented sector.

This white paper that has been promised is expected to detail the reform package, including requirements for all private landlords to belong to a redress scheme, potential changes to the enforcement system and improvements to the possession process in the courts.

Lord Greenhalgh, the Housing, Communities and Local Government Minister in the Lords, said in a debate recently that the white paper will also include more detail on reforms to tenancy law to abolish Section 21 (so-called ‘no-fault’ evictions) and measures to improve security for tenants in the private rented sector.

Will the NRLA proposals make it to the Renters’ Reform Bill?

We at the NRLA released our proposals for the Renters’ Reform Bill in December. We are calling for:

Our proposals were developed following consultation with members and those in the industry. They have been sent to the Government and well received across the sector. They strike a balance between a fair deal for landlords and reforming the sector, with the aim that the new Bill works for both landlords and tenants.

We’re confident our proposals include what the Government has set out to achieve in the Renters’ Reform Bill, however, we’re a long way from the Bill being brought forward.

While an exact date for when the Bill will be introduced is as yet unknown, what we can be sure of is that as the white paper and Bill develop, the NRLA will continue to campaign to shape the planned reforms and lobby the Government to get a fair deal for both landlords and tenants.

If you would like to engage with us further on our proposals and want to share your feedback on our proposals you can via our campaign page.  To keep up to date with the latest news on the Renters Reform Bill, and other changes to tenancy regulations, join the NRLA today.

Alexandra joined the NRLA in 2020, having completed her Masters’ and with political campaigns experience. Alexandra project manages NRLA campaigns, coordinates campaign content and works with stakeholders across the housing sector. She is also responsible for creating and updating the major campaign pages on the NRLA website.