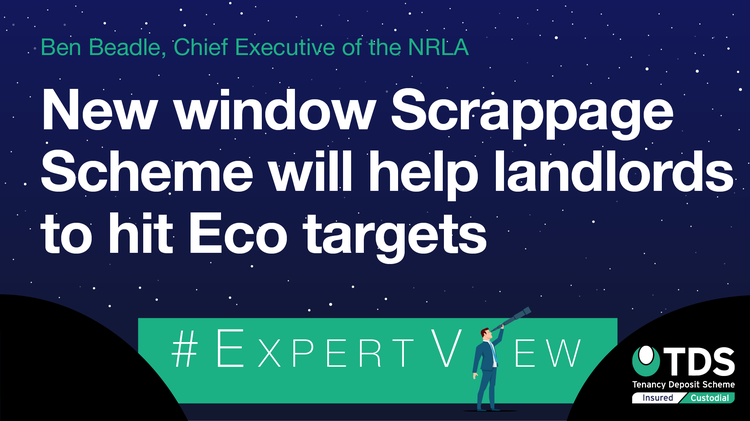 Landlords often lose out when it comes to energy efficiency incentives.

Just five per cent of private rented households have received Government help to fund energy efficiency measures, according to recent research, despite having the greatest need.

Now, with ambitious energy efficiency targets set to be imposed on the private rented sector, the NRLA are proposing an innovative new scheme to help.

The proposals would see Government cash invested in a new window scrappage scheme.

The NRLA is also calling on the Government to make energy efficiency works tax deductible.

PRS a ‘poor relation’ when it comes to funding

Historically the Private Rented Sector (PRS) has lost out when it comes to incentives to improve a property’s energy efficiency.

Just five per cent of PRS households in England have received support from the Government, compared with 21 per cent of owner occupiers, 12 per cent of council householders and 11 per cent in housing association homes.

According to Government figures, it would cost an average of over £7,500 to bring rental properties needing it to an energy rating of at least C, with a proposed £10,000 cap on the cost of works.

However, with the average net annual rental income for a private landlord being less than £4,500, it is clear this will be unaffordable for a significant number.

What are the Government’s proposals?

The Government has committed to achieving net zero carbon emissions by 2050.

The challenge is huge, especially with a third of private rented sector homes built before 1919 making it harder to carry out improvements.

And, with 2.9 million PRS properties – 62% of the total – having an EPC rating of D or below, it is clear significant investment is needed to help bring properties up to standard, if landlords are to stay in the market.

A survey by TDS discovered that the 27% of landlords who will be affected by the new rules have said they would sell up if the proposals are passed, which would have a major impact on the overall number of homes available to let.

Ministers had tried to bring about positive change through its Green Homes Grant scheme.

Launched in September last year, it offered vouchers of up to £5,000 to homeowners including landlords, to be spent on energy efficiency improvements, subject to certain conditions.

However, the scheme was axed just six months after it was announced, due to low take up. This was blamed, in part, on complicated criteria that rendered many landlords ineligible.

The NRLA now wants to see this cash funnelled into a new simplified energy efficiency scheme that will target those PRS homes most in need of improvement.

With the proportion of homes without double glazing higher in the PRS than any other tenure, we believe this is an area where investment could see the biggest impact.

All were snapped up within three months.

For windows, the priority would be to replace single-pane?windows, then secondary glazing,?and older, less efficient double glazing.

We are also calling for energy efficiency measures carried out by landlords to be offset against tax as ‘repair and maintenance’. At present they are treated as an improvement at sale against Capital Gains Tax.

This would address anomalies in the system, for example. At present, replacing a broken boiler is tax deductible, however replacing one for a more energy efficient system is not.

The NRLA is now calling on the Chancellor to develop a financial support package that works for both landlords and tenants.

This should especially be targeted at the hardest to treat properties where the cost of work will be prohibitive for landlords. In this way, he will also be doing the most to help those in fuel poverty.

You can stay in the loop with NRLA’s progress by becoming an NRLA member or TDS customer.

Already an NRLA Member? Great! You’ll get exclusive discounted rates when you join TDS Insured. Or, if you want to join TDS Custodial, it’s completely free! Find out why other landlords have switched to TDS: Why Switch? If you liked this article, you’ll probably find this one interesting too: #ExpertView: EPC Legislation Explained For Landlords And Tenants