Home»Blog»#AskTDS»#AskTDS: “Who is responsible for mould bu...

#AskTDS: “Who is responsible for mould building up in the property I let out?” 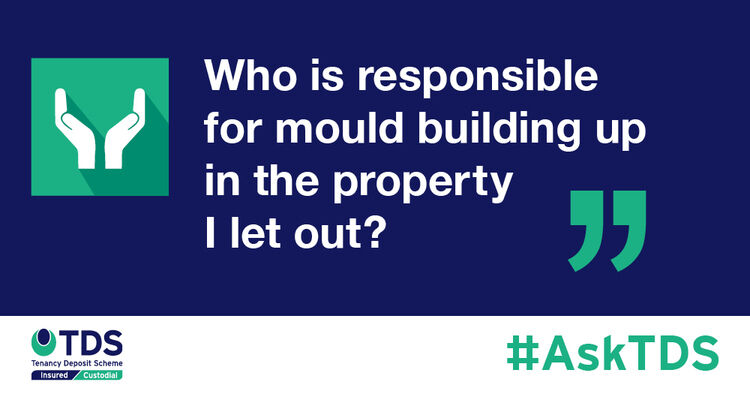 This article has been written in response to a landlord’s query: “Who is responsible for mould building up in the property I let out?”

During the winter months, the weather is cold and damp and it’s common for households to experience problems with a build-up of condensation and mould in their homes; this can happen in rental accommodation as well as your own home.

The presence of mould can be unpleasant to look at but can also seriously affect an individual’s quality of life. For example, mould spores can aggravate allergies or contribute to respiratory issues; unsurprisingly this can lead to conflict between landlords and tenants over who is responsible and who should make good the damage.

Landlords have a responsibility to ensure their rental properties are habitable, making sure there are no problems with mould or damp before the tenant moves in. It is also worth guiding your tenant(s) as to how to avoid mould developing, for example not drying clothes inside or if needed ensuring the property is sufficiently ventilated, especially in bathrooms where steam and cold surfaces come in to contact. Some properties may have bathrooms or shower facilities that don’t have window; this is particularly common in flats. Properties such as these should be fitted with an extractor fan instead which, when in good working order, help to remove excessive moisture from the air preventing the build-up of damp, condensation or mould.

If a property was free from mould at the beginning of a tenancy, but appeared during the tenancy due to a lack of preventative measures by the tenant, then the tenant could be held responsible for this and therefore a claim against the tenancy deposit may follow.

Can I deduct the cost of cleaning mould from my tenant’s deposit?

If the tenant is responsible for the build-up of mould during their tenancy, maybe due to a lack of housekeeping, then it is possible that deductions may be due from the tenancy deposit to cover the issue. Landlords should ensure that the deposit use clauses in the tenancy agreement cover such issues, a record in the inventory and clear guidance to the tenants would also help.

Landlords may not be awarded damages or cleaning costs for mould if it is not agreed in the tenancy agreement that the tenancy deposit can be used in this way.

The Tenancy Deposit Scheme (TDS) is a government approved scheme for the protection of tenancy deposits; TDS offers both insured and custodial protection and also provide fair adjudication for disputes that arise over the tenancy deposits that we protect.

TDS can only comment on the process for this scheme, other deposit protection schemes may have a different process/require different steps. Content is correct at the time of writing.